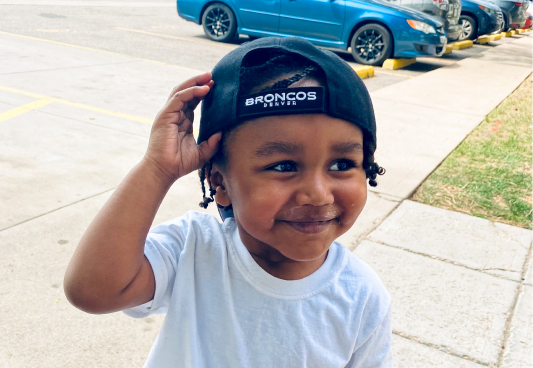 “The support I received was critical to my family’s survival. The support was a blessing. It was a weight off my shoulders.” — Taylor, Kaiden’s Mom

The last thing any mother wants to hear is that her child has health complications before they’re even born. But at her 20-week ultrasound appointment, Taylor received alarming news. Her son, Kaiden, had a congenital heart defect.

Kaiden had a small, underdeveloped heart, which reduced its ability to pump blood to the rest of his body. Doctors explained Kaiden would need two major open-heart surgeries within the first few years of his life. As Taylor’s due date approached, her anticipation quickly mixed with fear, knowing her son would require intensive care. “I felt scared and worried for my child,” shared Taylor. “Conversations with your doctor about your child’s heart are conversations you never expect to have.”

Kaiden only spent two days in the Neonatal Intensive Care Unit (NICU), and much to the doctor’s surprise, one of Kaiden’s heart defect complications self-corrected in utero. This gave Kaiden more time to grow, allowing his body to become strong enough to endure surgery. At 8 months old, Kaiden underwent his first successful open-heart surgery, and was able to go home after a 5-day recovery period.

Like most babies with congenital heart defects, Kaiden required special care even after he went home. He had regular sessions with speech, physical and occupational therapists, follow-up appointments with cardiologists, and got EKGs, echocardiograms, and lab tests, all in preparation for his second surgery.

Unbeknownst to Taylor, her worst nightmare was about to unfold. Taylor’s husband unexpectedly passed away, just two months before Kaiden was scheduled to have his second open-heart surgery. At the time, Taylor was also 7 months pregnant with her second child.

On top of emotional trauma, Taylor remembers the financial stressors related to staggering medical bills and sudden loss of income. Her mental health declined. She was depressed and struggling to cope as a newly single mother, with a sick child and a baby on the way. Taylor was unable to work and was solely reliant on her late husband’s social security survivor benefits. She needed to pay her bills but couldn’t afford it.

This overwhelming burden escalated into crisis when Kaiden was rushed to the emergency room and was immediately hospitalized for bacterial meningitis. What they thought would be a short hospital visit became a long-term residence for the two months Kaiden fought for his life. The meningitis left Kaiden deaf, requiring cochlear implants to restore his hearing.

“I didn’t have room to be weak. I needed to be strong for my son.”

Sadly, Taylor’s family is not alone. Many courageous families are experiencing financial struggles, forcing them to choose between treatment and providing necessary expenses like gas, groceries, lodging or rent, and utility payments.

In their time of need, financial donors were there when it counted – making it possible for Rocky Mountain Children’s Health Foundation to assist Taylor and her family with critical non-medical expenses, giving her the ability to be by Kaiden’s bedside.

Help us support brave families like Kaiden’s by giving a gift in the link below. Together, we can be there for these courageous families when it really counts.